Though this took place several years ago, it is a fascinating anthropological case that Dr. Eric Herbranson was a part of, utilizing 3D scanning technology. The use of the CBCT in our office has allowed us to revolutionize the way we approach endodontics and implant technology. Thanks for visiting Modern Endododontic Care of San Leandro, CA. 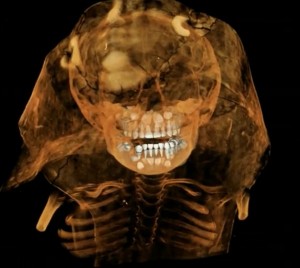 “This mummy is no longer just a fascinating artifact, but a lively young child who lived many ages ago,” said museum curator Lisa Schwappach-Shirriff.

“The images of this little girl are breathtaking and the details that we can see on her are nothing short of amazing.”

Museum workers to dubbed the girl mummy “Sherit”, which they said is ancient Egyptian for “little one”.

Sherit was close to five years old when she died and the absence of signs of injury suggests that she succumbed to dysentery or another illness common among children in Nile Valley at the time, researchers said.

To peer inside Sherit’s linen cocoon without disturbing it, radiologists at Stanford University’s School of Medicine south of San Francisco used sophisticated equipment to scan the girl’s remains.

The scans mined 35 times more information than those done on the famed King Tutankhamen mummy and enabled imaging experts to picture her in three dimensions, researchers said.

“Any time you can view anatomical data in three dimensions, you’ll have a much more accurate picture of the subject,” said Paul Brown a dentist with the Stanford-NASA National Biocomputation Center.

Brown and a team of fellow dentists, orthodontists and oral surgeons determined the mummy’s age and other features by studying computer imaging.

“She had kind of a cute smile, it looks like,’ said dentist Eric Herbranson. “If this child was born today, with the level of privilege she had, she would be wearing braces at 12.”

She was an active lass with a receding jaw line and, had she survived to Tutankhamen’s age of 19, she would have resembled him, concluded Stephen Schendel, a professor of surgery at Stanford.

Schendel, whose hobby is sculpting, headed the molding of a bust of Sherit to go with the museum exhibit, the curator said.

“The bust brings to life the story of this little girl who lived at a time when Egyptians, Romans, Jews and Christians all lived side by side,” said Schwappach-Shirriff.

Sherit had a “healthy skeleton” and the family “spared no expense” in her mummification, indicating that they might have been wealthy nobles, according to the curator.

The family was not royalty, because gold paint was used on the mummy case instead of pure gold, the curator said. Beads around Sherit’s neck date back to the Roman era 2,000 years ago, according to researchers.

While no one at the museum knew where the mummy came from, Schwappach-Shirriff said that the child probably lived in northern Egypt, around Luxor, because “most of the nice mummies’ are from around there.