Digital cameras for microscopic imaging can help dentists get a clearer – and closer – picture of the state of a patient’s teeth. But many of today’s video cameras now capture good, usable still images, and higher-end digital single-lens reflex (DSLR) still cameras can now record video, too. How does a specialist choose between still and video cameras when the line between the two is blurring? And where does the wand-type intraoral camera fit into the mix?

For dental microscopy, the type of camera that fits a given need depends not only on the quality required but also on the amount of effort the practitioner is willing to devote to image capture and processing. Courtesy of Dr. Eric Herbranson, eHuman. 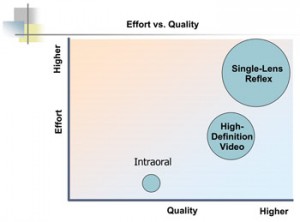 To gain insight into these issues, BioPhotonics caught up with Dr. Eric Herbranson, a clinical endodontist and co-founder of eHuman in Milpitas, Calif., which develops human anatomy education software. He also developed the Xmount (Global Surgical Corp.) series of microscope camera mounts. He has 40 years of experience in film and digital imaging, and frequently lectures on integrating technology into dentistry, using software and computers in education, and imaging with the surgical microscope. 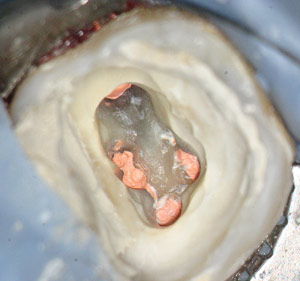 At left: In the pulp chamber of this upper first molar after the root canal has been filled, the pink material is the gutta-percha filling in the tops of the five root canals. The image was shot with a Canon 500D DSLR on a Global Surgical G6 surgical operating microscope. The camera was mounted to the scope with a 50:50 beamsplitter and an Xmount camera mount.

Digital cameras first started making inroads into imaging for endodontics out of necessity. “Specifically, in imaging through the surgical microscopes, film was difficult to use, and only a handful of people were successful with it,” Herbranson said. “Most people insisted on using transparency film because it was the lecture standard, but it required very accurate exposures to get decent images. “I pushed the use of reversible film for its broader exposure latitude, but either way, it was difficult, and most people would not or could not put up with the learning curve. We also did not have adequate camera mounts at that time.” 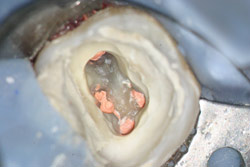 The same image as above, straight from the camera with no postprocessing. 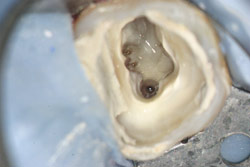 The same tooth as above, shot before the root canal fillings were placed. The image appears straight from the camera with no postprocessing.

And the images can be postprocessed, even though some dentists failed to realize that potential at the beginning. “Photoshop, of course, was a godsend since it allowed us to maximize the quality of the final image,” Herbranson explained. “There were a few people who thought the use of Photoshop was somehow cheating and unethical, but they didn’t understand the amount of image processing that already occurred inside the camera. That argument has pretty much died out.” 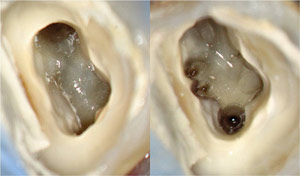 The tooth above, seen in a composite image of the “before” and “after” canal preparation.

There are, of course, cameras designed specifically for dental microscopy: intraoral cameras. These are small, with handles shaped to fit inside the mouth. The Kodak 1500, Herbranson noted, is a digital intraoral camera with a 1/2.5-in. CMOS sensor and offers still image resolution of 1024 x 768, video resolution of 640 x 480, an autofocus range of 1 mm to infinity, a 90° angle of view, and integration with digital radiology and cone-beam CT software.

But do dentists need special cameras for microscopy? Consumer DSLR cameras and digital video cameras can be used for microscopic imaging, according to Herbranson. It all comes down to why a dentist or other microscopist wants the images, whether for medical or legal reasons, for case reports, for patient education purposes or even for display during lectures. “How good do you want to be? How good do you have to be?” are two vital questions that must be applied to each application, he said. 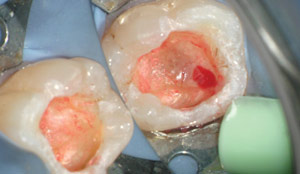 In this mid-treatment image of a lower first molar after decay was cleaned out, the red spot is an exposure of the pulp of the tooth. The image was captured using a high-reflective front-surface zirconium mirror with a Canon 500D DSLR. The histogram is included to illustrate the exposure accuracy of a camera that is properly set up.

DSLR cameras, he said, take great-quality stills and video; high-definition (HD) video cameras take great video but only good-quality stills. The quality – and the cost – can vary widely, even within a single manufacturer’s product family. 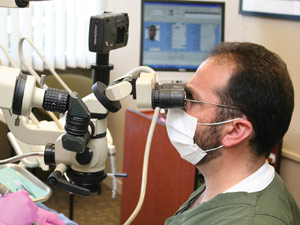 Dr. Herbranson’s practice partner, Dr. John Jaber, uses the microscope. The camera on the scope is a Nikon Coolpix 990.

Herbranson named Sony as an example: The HDR-CX520 costs around $1100, and the HDR-CX100 costs $400. For the extra money, of course, you get better features: The HDR-CX520 boasts a 1/2-in. CMOS sensor that captures full HD video at a resolution of 1920 x 1080, 12-megapixel still-image capture and 32-MB internal flash memory. The less expensive HDR-CX100 offers only a 0.2-in. CMOS sensor. Its resolution is the same, but it takes still images at only 4 megapixels and has just 8 MB of internal flash memory.

Both are useful for dental purposes, and they interface easily with the dental microscope to record a wide variety of procedures from restorative to endodontics to surgical. And the dentist can use either the auto or manual focus mode to get the best possible look at the tooth in question. 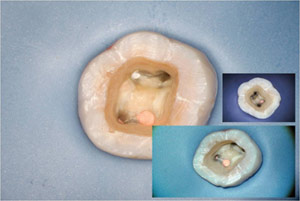 In this composite of three pictures, one was shot with a DSLR, one is a still image from a Sony video camera, and one was taken with a dental intraoral camera. These are pixel-for-pixel representations, and the size difference illustrates the significant difference in the pixel density of the various cameras.

For dentists who want to control more than just the focus mode – those who really need to get up close and personal with the images for diagnostic and treatment purposes – DSLR cameras are another option. They can run into the thousands of dollars, though the most expensive cameras are too heavy for the microscope. The less expensive “prosumer” DSLRs have the necessary features and are smaller and lighter.

For example: The $800 Canon EOS 550/600D (Rebel T2i/T3i) offers live view and has a CMOS sensor that can capture 18 megapixels, and sensitivity settings of ISO 100 to 6400. It takes full HD video at varying resolution. And that flexibility is the most important feature, Herbranson noted: The user can have full creative control over aperture, shutter speed, depth of field and more. “The new mirrorless interchangeable lens cameras such as the Sony Nex-3,5,7 series and the Nikon 1 series offer all the features of the DSLR camera but with a smaller size and less weight,” he added. “They are close to being the ideal camera for the dental microscope. All these camera types use a similar customizable mounting system to attach them to the microscope.” 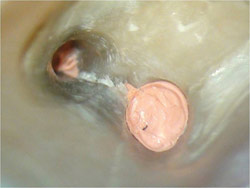 A high-magnification image of the floor of the pulp chamber of the same tooth. This is about 20x magnification – at the upper limit of what these dental microscopes can do. Shot with a Canon 500D, this image would be impossible with the other camera types. It illustrates the very shallow depth of field typical of high-magnification microscope imaging.

In general, there is a trade-off between effort and quality when intraoral cameras and consumer cameras sit side by side, and there is a progression to that trade-off: Intraoral cameras require the least amount of effort on the part of the practitioner in terms of mounting, use and image postprocessing, but they offer lower quality levels than the other two types. Next come HD video cameras, which create better-quality images but require more finagling than intraoral cameras. And at the top of both the effort and the quality scales are DSLR cameras: The user has to know how to use them – or get some kind of training – but the potential quality of the images is much higher with DSLRs than with the other two camera types.